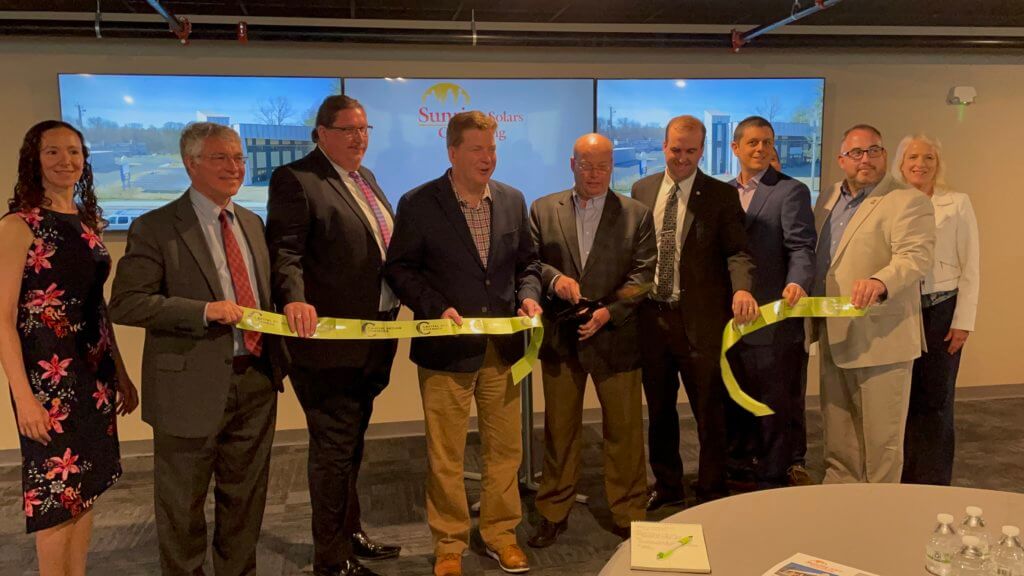 The steady summer rain did not dampen the mood at the indoor ribbon-cutting in the Capital Region’s newest coworking space, Sunrise Solars Coworking.

A group of real estate developers, local officials, banking representative and other professionals – including new members of the coworking space – gathered in the Great Hall on the Garden Level of the strikingly designed modern office building. All were in the good spirits that naturally accompany a major completed project and the return to near-normalcy following the COVID-19 pandemic.

Sunrise Management & Consulting’s chief strategy officer, Heather Schechter, kicked off the comments. “Since 2018 there have been major changes to the office market and where we work,” she began. “There has been a move toward more fluid remote and in-person configurations; a desire for windows that open; fresh air; and for the first time, HVAC filters were in the news.”

The mixed-use building with 14 coworking office spaces offers all of those elements, as well as high-speed internet, complimentary coffee in the shared kitchen, and conference rooms equipped with the latest technology.

Schechter then invited to the podium Seth Rosenblum, president of the Rosenblum Companies and a mentor to Sunrise in the flexible office arena. He talked about how the term “coworking” was buzzing pre-COVID, but then focus shifted to “work from home” then “work from anywhere,” and now we see the pendulum swinging back to people wanting to be in offices and work more in the physical world.

“Just like everything we’ve all experienced – whether it’s technology or virtualization of our businesses – over the last 15 months, the acceleration of this workspace trend has probably catapulted five to 10 years into the future,” Rosenblum said. People have realized that they don’t need a big space with a lot of file cabinets; they can work more flexibly, from anywhere, enjoyably, and have the agility to react to business changes. “I think it’s wonderful that this space coincides with that.”

Schechter then invited Sunrise founder and president Jesse Holland up to talk about the evolution of the project (which was admittedly delayed due to COVID construction difficulties but was worth the wait). He invited lending partner SEFCU’s head of commercial lending, Ed Jennings, up to say a few words.

“We are excited to be part of this revitalization,” Jennings said of the site along Troy-Schenectady Road. “We are very happy to help improve the communities that we serve through development like this and couldn’t be more proud to work with like-minded people like Jesse and Sunrise on projects like this.”

Holland then invited up Mark Eagan, president and CEO of the Capital Region Chamber, who said, “It’s important in our marketplace that we have developers who aren’t just meeting those emerging needs, but are anticipating those trends and responding to them. That’s what’s terrific about this project – and it really blends a lot of the amenities together,” Eagan said, and finished by thanking Sunrise for its commitment to our communities, referencing other redevelopment projects in Albany and Rotterdam.

Eagan then introduced New York State Assembly member Phil Steck, who said he came because of Holland, who is “not shy about letting us know about the problems of potential legislation in the real estate market,” and thanked him for his advocacy.

Steck was followed by Sean Maguire, director of planning and economic development for the Town of Colonie. “Our economy is constantly changing and growing, …to see products like this at Sunrise embrace that change – you can see it in the design of the building… the walking paths… it’s really something different,” Maguire said. “We’re really glad to have it here.”

Then Albany County Executive Dan McCoy’s office was represented by Lucas Rogers, who acknowledged the dramatic change in the office market and said that those who are able to adapt and anticipate the future, as Sunrise has demonstrated, are going to be set up to thrive.

The event concluded with the speakers and Sunrise team gathering for a ceremonial cutting of a green ribbon provided by the Chamber. Attendees were invited to take a tour of the coworking spaces above, and feedback was positive, especially about the large windows and amount of natural light, the interior color palette, and the locally sourced large-scale photography on the walls.

It was a pleasure to participate in such a positive event at a space humming with potential.

Shannon Ballard Gorman, d.b.a. The Write Idea, is a freelance writer and marketing communications specialist who is looking forward to spending time at the Sunrise Solars Coworking space this summer.